This spring has been fraught with all too much snow and not enough warmth to get any fresh food growing that's not protected by hoop houses and greenhouses. This has caused me to lean heavily on eggs as I conjure this and that.

Our egg supplier says the ducks have been laying like crazy. They know it's spring, even if the weather has been slow to emulate the calendar. Today I'm sharing a recipe for Pannukakku which is Finnish Pancake sometimes also referred to as Kropsua.  We live amongst a significant Finnish population that's been here a few generations now. Many of them are fairly certain about such things as Kropsua and Pannukakku, and some of those are certain in slightly different ways, if you get my meaning. The following is close to the recipe we've chosen for the Rock River Cafe' for its authenticity and its speed of preparation. There is another school of thought which requires a whole bunch more milk and a whole lot more time. I would guess that it's much more custardy and worth the wait.

The following recipe is great when made in an iron skillet in the oven, fairly quickly. In fact, here's a video I often refer to that shows the completed project just out of the oven, as it deflates.  The video even has some wonderfully celebratory music that accompanies it! 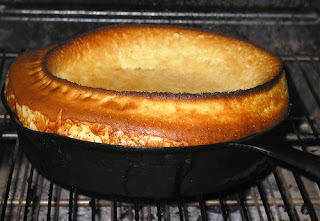 Preheat the oven to 400 degrees, placing a 12" lightly oiled (seasoned, not greasy) iron skillet inside immediately. Make ready all of your ingredients. Begin by beating the eggs in a mixing bowl with a fork until well blended. Beat in the milk, sugar, salt, vanilla and lastly, gradually add in the flour, continually stirring. Allow for lumps, but only small ones.
Throw the butter into the hot skillet, allowing it to quickly melt, and then follow it with all of the batter and close the oven door.

Bake for approximately 30-40 minutes. It is done when a knife comes out clean. Allow it to rest a few minutes before serving.

Posted by Pat Freeman Nesberg at 10:47 AM